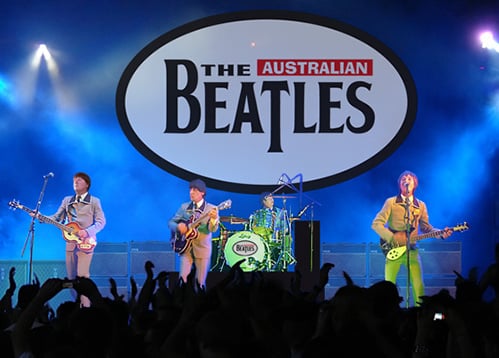 Taking you back to when life was FAB!

Based in Perth, The Australian Beatles are a world renowned Beatles Tribute Show Band.

The Australian Beatles are a Beatles tribute band like no other, and feature authentic costumes and instruments. This tribute show will transport you back to “when life was FAB!“

The Best of The Beatles

Superbly reproduceing the sights and sounds of the greatest band in history. From the early ‘Fab Four’  days with mop top hair and matching grey suits, through to ‘Beatle-mania’ and the ‘British Invasion’ of the USA.  And let’s not forget one of the most important albums ever recorded,  the astonishing psychedelic horizons of ‘Sgt. Pepper’ and then beyond to Abbey Road.

Pre-Covid, the Australian Beatles tribute show was on a constant world tour! With performances in Hong Kong, Singapore, Japan, New Zealand, China, Malaysia and Australia.  Additionally, The Australian Beatles were seen performing on the world’s most prestigious cruise ships.  The band returned to perform on Ovation of the Seas and Spectrum of the Seas around Aus/NZ and China/Japan throughout 2019 into 2020.

Currently The Australian Beatles are performing throughout Australia, including a WA regional theatre tour in July 2021 and NT tour in September 2021.  The band can’t wait to ‘Get Back‘ to international touring and are currently accepting international bookings from 2022 onwards.

Members of the band have been featured extensively on Australian and Asian TV as well as radio stations 6IX , 6PR, 96FM in Australia and BBC Radio 1 & 2 in UK. Their 2019 performances in Hong Kong Stadium were broadcast on Sky TV in UK and USA and Foxtel TV in Australia. Additionally, members have also performed at The Cavern Club in Liverpool, with drummer Dave Swan also being the Australian Ambassador to Liverpool’s famous Beatles Story Museum.

To watch The Australian Beatles in HD full screen; mouse over the video and click the YouTube icon.

Photos of The Australian Beatles

Theatre, festival and corporate shows are now available with a full video backdrop. The backdrops takes audiences back in time with the sights ‘Swinging Sixties’. There’s a reproduction of the famous Cavern Club, Pepperland and many other Beatles’ backdrops.

This tribute show can also be booked as part of the All Star Showstoppers tribute evening with the same nucleus of five musicians performing tribute shows, our most popular being our Beatles Vs Stones tribute combination evening. We also can combine The Australian Beatles with the following tribute bands: Abba, David Bowie, Cliff Richard & The Shadows, and the unique All Star RockShow and the All Star Supergroup finale!

More information on The Beatles

Hard Days Night
All My Loving
I wanna Hold Your Hand
I Feel Fine
Roll Over Beethoven
8 Days A Week
Can't Buy Me Love
She Loves You
Yesterday
Ticket To Ride
I Should Have Known Better
Help!
I Saw Her Standing There
Twist & Shout
Sgt Peppers Lonely Hearts Club
With A Little Help From My Friends
Get Back
Hey Jude
Nowhere Man
Honey Don't
Back In The USSR
Revolution
Lady Madonna
Love Me Do
Money
Ob La Di
Penny Lane
We Can Work It Out

and so many more!