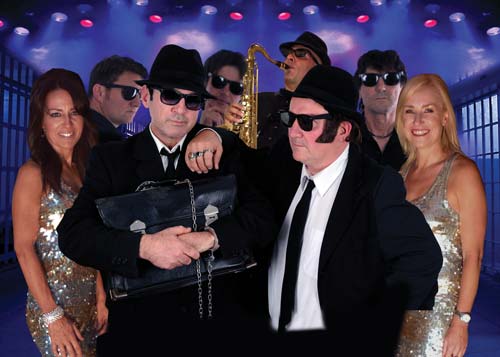 Australia’s premier Blues Brothers tribute show has packed theatres, dance floors and festivals around the world, including performances in Singapore, Indonesia and Hong Kong.  They have been featured on TV and radio shows in Asia and recently featured on Australia’s Channel Seven.

To broaden the appeal of this show with younger audiences we now feature some modern standards including ‘Uptown Funk’ (Bruno Mars), ‘Happy’ (Pharrell Williams), ‘Shake It Off’ (Taylor Swift) and ‘Ex’s & Oh’s’ (Elle King) – All wrapped up in the Blues Brothers / Soul Sister theme.

You’ll certainly be ‘Shakin’ your Tail Feather’ when Jake & Ellwood Blues hit the stage backed by live musicians with this all singing, all dancing revue of Blues Brothers. Pete DeVita (Jake) and Tom Jennis (Ellwood) front this action packed tribute to the brothers of blues. The show includes all the classic hit songs from the Blues Brothers movie as well as whips, handcuffs, and of course, plenty of dark sunglasses!

Let the Soul Sisters add some soulful glamour to the entertainment.  The Soul Sisters setlist is a journey through Soul, R&B and Motown classics by the legendary Aretha Franklin, The Supremes, Martha and the Vandellas, Etta James, and sprinkling of more modern soulful hits from Amy Winehouse.  The Soul Sisters and Blues Brothers share the stage in this entertaining combination that fills dance floors and thrills family festival audiences.

‘It’s 106 miles to Chicago, we gotta full tank of gas, half a pack of cigarettes, it’s dark, and we’re wearing sunglasses’.

This exciting show is also available with an additional full brass section – perfect for national and international Blues Festivals.

This tribute show can also be booked as part of the All Star Showstoppers tribute evening with the same nucleus of five musicians performing tribute shows to The Beatles, The Rolling Stones, Abba, David Bowie, Cliff Richard & The Shadows,  and the unique All Star RockShow and the All Star Supergroup finale!

>More info on The Blues Brothers

What the media says

…….….Fabulous entertainment had them dancing from the outset ….
Di Bauwens, West Austraiian Newspaper, on our performance at The Butterfly Charity Ball, Perth. June 2011.
We use cookies to ensure that we give you the best experience on our website. If you continue to use this site we will assume that you are happy with it.Ok